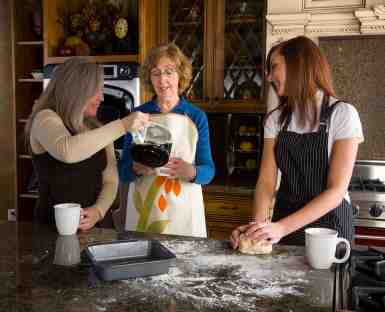 The thought of fall just brings visions of meringue pies! YUmmmmmm! Want step-by-step help to make it yourself this fall? Well, check out today’s recipe…

How to Make It:

Place the pumpkin puree in a large mixing bowl.
Add the 1/2 C sugar to the puree.
Sprinkle in the cinnamon, nutmeg, cloves and 1/2 tsp. salt.
Fold all together until completely mixed.
Stir in the 3 egg yolks until mixed into the puree well.
Slowly add the evaporated milk making sure to stir while adding.
Be sure the milk is mixed well into the puree.
Bring the oven temperature to 400 degrees.
Pour the pumpkin mixture into the unbaked pie shell.
Bake 35 minutes or until a knife inserted in the center of the pie comes out clean.
Remove the pie from the oven and raise the oven temperature to 425 degrees.
Place the 3 egg whites into a bowl.
Sprinkle in 1/8 tsp. salt and mix with an electric mixer until well blended.
Continue beating the mixture an add 1 TBSP of sugar at a time until blended in.
After all the sugar has been added continue beating until soft peaks form.
The meringue is done when the mixture becomes stiff and peaks form when you lift the beaters up and out of the mixture.
Spread the meringue over the baked pie making sure to go completely out to edge of the pie.
Place the pie back in the oven for 7 minutes or until the meringue begins to brown.
Place the pie on a wire rack to cool.

Meringue shrinks during cooking so be sure to spread it to the very edge of the pie so the pie remains completely covered with the meringue once finished baking.  Use a butter knife to form the peaks in the meringue when placing it on the pie.